A photographic exploration of Tokyo’s sex clubs from the early 1980s by Nobuyoshi Araki. 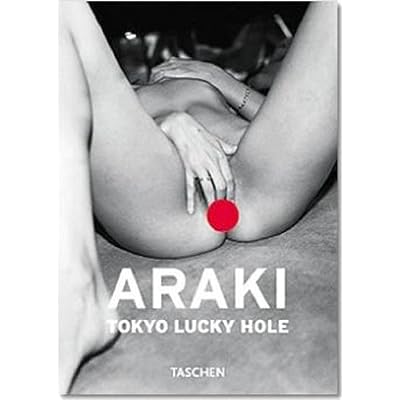 Tokyo Lucky Hole is a huge volume of photographs documenting the sex clubs of Shinjuku.  The pictures come from a variety of clubs, from the early no-panties coffee houses to specialized perversions such as a club where the patrons lie naked in port-holed coffins and are masturbated by “mourners” sitting atop.

Many of the photographs are taken in and around the public areas of the clubs and document the shows and environment of the clubs, which seem to range from merely titillating or just plain silly to live sex shows where the performers fellate volunteers from the audience on stage or mount them; a bit like a sex-positive circus.

Another common theme is candid snapshots of the performers, most laughing or smiling, all enjoying themselves.  The prologue explains that the sex scene of the early 1980s opened up to amateurs: students and housewives who could make good money in a fairly non-threatening environment of these sometimes very silly venues.  Their good spirit shows through in the pictures.

The book is a 700 page, comprehensive documentary of a unique period of sexual history.

One thought on “Tokyo Lucky Hole”